Brooklyn-based emcee Joey Bada$$ is releasing his much-anticipated debut album ‘B4.DA.$$’ today. A couple of months ago he performed at Le Botanique in Brussels and thanks to the lovely people over at Chase I had the chance to interview him. We talked about him growing up in Bed-Stuy, his debut album ‘B4.DA.$$’ and much more. 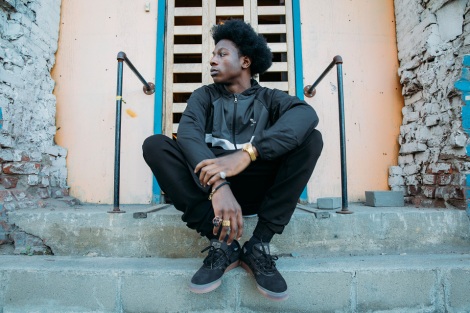 You grew up in Bed-Stuy, Brooklyn, a legendary place throughout hip hop history, how did growing up there and the legacy of emcees like Nas & Biggie influence you as an artist?

It was the whole landscape. I breathe and live hip hop automatically.

It shines through in your music that you where really influenced by hip hop from the mid-nineties. A lot of new acts bring trap music and heavy beats. How come you and your crew Pro Era decided to go counter-stream and stick to the more traditional hip hop?

Because that’s what’s real and that’s how we feel. That’s our expression. Music is generally an expression so the music that you’re making is an expression of who you are and this is who we are.

B4.DA.$$ is scheduled to be released on January 20, which is also your birthday. When you released the trailer for the album you said that the number 20 is very unique and symbolic to you. What did you mean by that?

Just look at the alignment: It’s my first album, 1; on my twentieth birthday, 20; and 1/20 is also my birthday so that’s what’s behind that statement.

Is there a specific reason why you wanted to put it out on your twentieth birthday?

Not really, but I never made an album and it’s a lot more work than just dropping a mixtape. When I finished the mixtape was when I dropped it, but when your album is finished there are still a lot of other things to be done. Because of all those things, I would’ve had to settle for a release date in December. It didn’t make sense to me to drop my debut album in the last month of a shitty year in music. Even psychologically doing things at the beginning of the year are fresh and fun. It just so happened that my birthday fell on a Tuesday, the day all albums drop and that made me feel like this makes perfect sense, it’s fate.

What can the fans expect from the album?

Nothing. I try to encourage everyone to drop expectations because expectations ruin everything. People just need to accept the album.

You’ve been touring in Europe for a little while now. What’s the biggest difference between a European crowd and an American crowd?

People in Europe are way more hyped because in America people can see you perform you whenever they want. If they’re halfway into you, they might not come to the show or catch another one but when you come to Europe, it’s like woah, this is madness.

How important is it to have the Pro Era crew with you on tour?

Very important. There’s nothing like the energy of all of us collectively on stage and they keep me on my toes too.

You’re 19 and already touring the world. How do you deal with the fame?

I’m still learning to deal with it everyday because it’s constantly growing. It’s kind of weird but it’s something I have to deal with. There’s no more turning back for me at this point.