Mick Jenkins is only 24 but has already released five projects. It wasn’t until his fourth mixtape The Water(s) which he released last year that he managed to catch some international buzz. Since that release multiple music websites have mentioned him as one of Chicago’s most talented young rappers. Earlier this year he unveiled his  EP Wave(s) which got rave reviews by many media outlets. On October 23 he performed at De Vaartkapoen in Brussels. We were there and had a conversation with the young rapper about Chicago’s influence on his carreer, how he met Kaytranada, his upcoming album The Healing Component & much more.

Read the Dutch version of this article on Chase.

You started out as a spoken word artist. How did the transition to making hip hop come about?

It was pretty seamless actually. I started with poetry and when I got to university I joined a poetry group and a couple of guys in the group rapped. There was a rap competition and I decided to enter because I thought it would be fun to participate and the head prize were Beats headphones and I really wanted to win them. After the competition I started rapping more often, I put out two mixtapes but it wasn’t until I put out my third mixtape that I started pursuing a career in hip hop. Trees & Truths was the tipping point.

You moved to Chicago when you were ten. How did that new environment shape you as an artist?

I am completely the man I am because of Chicago. I went to school there, a lot of my family and a lot of the people I learned from lived there. The biggest part of me becoming who I am today was being able to go around the city the way I was and see the different cultures. Chicago is a very segregated place. I could go to the Southside and be around black people or go more to the west side of the town where I would come across hispanic culture. Moving through different areas in the city also meant moving through different cultures and that’s definitely had a big impact on my developement.

Last month you dropped Wave(s). How is this EP different from your previous project The Water(s)?

It was refreshing for me to be able to do Wave(s). Since Trees & Truths I’ve been putting a lot of time and effort into heavy conceptual albums and I just wanted to take a break from that. I’m always creating music so after I finished The Water(s) I went right back to making music but I didn’t want to dive right back into another deep concept. The tracks on Wave(s) are based on the vibe in the studio the when I was recording them. I  ended up using more live instrumentation and I ended up singing more. It’s always good to change up the creative style a little bit and it was fun to do.

You recruited a 20-year-old art student to create paintings for every track on the project. How did that concept came about and how did you find the right person for the job?

I never gave a lot of credit to the artwork of a project but since we were paying more attention to production, song structure, choruses & bridges we felt like we should elevate the quality all around. I had the idea to let an artist hear every track on the album and let them paint exactly what they felt. I sent it out on twitter and a lot of people sent replies with their art. Later, I asked three people to paint Your Love and I definitely liked Hayveyah McGowan’s painting best. I like the deep colors because they evoke emotion. Then I asked her to do Alchemy and I really liked that painting too and the rest is history. It’s given us the opportunity to capitalize on the fact that we brought another medium into play. The listening party was also like a gallery, a showcase and a questionnaire between myself and her to really explain my intentions with the music and what she received and what her approach was when it came to making the paintings. It was a really cool experience and it’s something that I’m probably going to continue to do in the future. 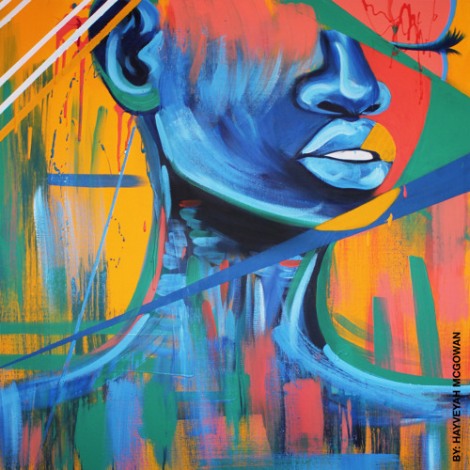 I’m a big fan of your videos and DJ Booth recently described them as short films. How do the ideas for you videos generally come about?

I’m definitely very involved when it comes to my videos. Nathan R. Smith shot the video for Jazz and we’ve been working together ever since. We work really good together. He mostly sends me a treatment and I give him feedback and add some little tweaks. He just really captures what I want my videos to look like. Before I started working with Nathan I was even more involved. Martyrs was my first video and for that video I was personally making sure that we were getting the rights angles and shots to make it look the way it was supposed to look. That’s okay but I do like the freedom to give direction to somebody who completely understands my vision.

Your latest single Your Love was produced by Kaytranada, one of the hottest producers in the game right now. You have four songs together and it really sounds like you guys have great musical chemistry. How did you meet and how is it like working with him?

I met Kaytranada at Mural Fest in Montreal. We were eating Poutine at the same shop and my manager recognized so we went over and had a short conversation. We’ve come to build a decent relationship over time. I’ve played shows with him, I see him at different festivals and in Montreal. He’s an amazing producer, there’s not a lot of his music that I don’t like. He’s going to be on my new album too and I’ll be on his. Kaytranada and ThemPeople are artists who I frequently collaborate with because I listen to their music very often and I’m blessed enough to work with them. There’s not going to be any shortage of that at all.

On Your Love you were experimenting with a more funky sound. Will we be hearing more of that sound on The Healing Component?

Not necessarily in that direction. That was just a record that fit my mood at that time. He sent me a batch of beats and that was the first thing I heard and I wrote the song like an hour later. I was inspired by the instrumental and by real love. It was just a cool song to do. I’m not necessarily taking my music into that direction but that doesn’t mean that there won’t be more tracks like that on the album.

Who have you been working with for the album?

Right now just ThemPeople & Kaytranada. I’m open to a lot more production. I just got off tour with STWO, I got blessed with a lot of great production but I’ve been writing a lot because I’ve been on the road so I won’t be able to get in the studio until I get home. It remains to be seen.

When could we expect The Healing Component?

I’m expecting The Healing Component in the summer of 2016. It’s not set in stone but I’ve been working on it since April and a lot of songs have already been recorded.

We’re looking forward to that. Have a great show & thanks for your time.